ISLAMABAD: Pakistan Federal Union of Journalists PFUJ has condemned the Israeli bombing of a building in Gaza housing various media outlets and their staff.

In a statement issued Sunday, PFUJ President Shahzada Zulfiqar and secretary general Nasir Zaidi said the bombing amounted to frightening media persons who have been covering the terrible war that has claimed so many lives.

“Such bombing flies in the face of the tall claims of Israeli leaders asserting that they are the only democratic state in the Middle East. We believe that after this bombing it would be difficult for media persons and journalists to cover the conflict in an objective way without the fear of being attacked or bombed”.

PFUJ leadership also condemned Israeli brutalities against innocent Palestinians and forcible occupation of houses of residents of Gaza and East Jerusalem which may further aggravate agonies of Palestinians. “We call upon international community and United Nations Security Council to immediately intervene to save further loss of lives,” they demanded.

They said it was not only this bombing that jeopardised the lives of media persons but before that bombing the Israeli authorities tried to use media in a manipulative way. “Such deceptive behaviour of the Israeli authorities amounts to using media as a tool of psychological warfare. This is highly condemnable because in a conflict zone such behaviour could cause grave security problems for media persons”.

The leaders of the journalists’ fraternity demanded the United Nations, global journalists’ bodies and the international community to set up an inquiry commission for probing into the matter of the bombing of the building. 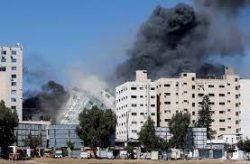