ISLAMABAD: The Supreme Court (SC) Monday adjourned till December 7 hearing into a contempt of court case against ARY Television Chief Executive Salman Iqbal and Mubashir Lucman, an anchorperson, for maligning the judiciary in a programme and being involved in anti-judiciary banners case.

The court was informed that Anwar Mansoor Khan, counsel for Salman Iqbal, was abroad while Abid Zubairi, counsel for Mubashir Luqman, was not feeling well hence they could not appear before the court .

The court was also informed that passport of Salman Iqbal was with the Pakistani embassy in United Arab Emirates (UAE) therefore he could not come to appear before the court.

Justice Ijaz Afzal Khan observed that they have noticed on the previous hearings that learned attorney general did not appear before the court.

Meanwhile, the court deferred the prosecuting until December 7 and adjourned the case.

The court on January 5 indicted Salman Iqbal and Mubashir Luqman in the contempt of court case.

The court, after rejecting the unconditional apologies, submitted by Salman Iqbal and Mubashir Luqman, had framed charges of contempt against them for maligning the judiciary while airing a programme.

On court’s direction, Attorney General had submitted before the court the list of evidences, affidavits and other documents in the contempt case. 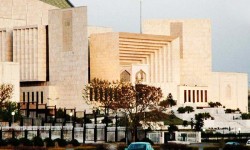