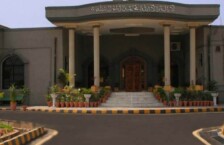 IHC press release also pertained to this private TV channel. The IHC chief justice referred to miscellaneous petition seeking judicial notice and said a plea had been submitted in this regard.

During hearing of Rana Shamim affidavit in contempt of court case, IHC Journalist Association President Saqib Bashir told the court that a press release issued by the court regarding ARY’s misreporting in which media house was not mentioned and thus the made all the court reported suspicious.

At this the IHC chief Justice pointed at The News Editor Investigations Ansar Abbasi that he had submitted plea in this regard.

He said that channel name was not mentioned in the press release because only one channel misreported the hearing. He said that high court reporters are highly professional.

Earlier, the petitioner stated in his application that ARY News wrongly attributed some remarks to the IHC chief justice against the applicant, which were never given by the judge. He attached a screen shot of the channel showing alleged remarks of the IHC CJ that “Ansar Abbasi’s fake news turned a truth into a lie”.

Ansar Abbasi stated that the channel attributed a remark to the IHC CJ which he had not given against him. He stated that other reporters present in the court room also denied that any such remarks were given by the IHC CJ against him.

He stated that he reserved the right to take legal action against ARY News channel. He requested the court to take notice of the remarks against him, wrongly attributed to the IHC chief justice.