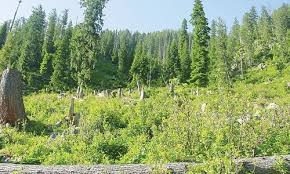 PESHAWAR: Forest guards serving under the Billion Tree Tsunami forestation project have asked the government to materialise its commitment about their scale upgradation.

Speaking at a news conference here on Monday, Forest Guards Foresters and D/Rangers Association Khyber Pakhtunkhwa President Muhammad Zeb Khan said the Billion Tree Tsunami project was recognised at the world level. He said the Pakistan Tehreek-e-Insaf (PTI) government gained popularity at the world level due to this project.

Muhammad Zeb Khan maintained that forest guards were the custodians of forests as they had rendered sacrifices for protection of the forests. He said that the Billion Tree Tsunami project was completed in a short span of time. The office-bearer said the provincial government had announced to reward the employees by upgrading their scales after success of the project. He added that a total of 3,000 project employees were awaiting scale upgradation.

Muhammad Zeb Khan deplored the department was using delaying tactics and not issuing the notification about their upgradation. He added the employees were being harassed by issuing chart-sheet against them.

He said it would be impossible for employees to continue their duty under the prevailing circumstances. He said that a forest guard was responsible to monitor around 562 acre land in the forests. Muhammad Zeb said the federal government had announced to plant two billion saplings in Khyber Pakhtunkhwa under prime minister’s afforestation project, but it would be difficult to execute the project if the employees were not facilitated.

The News International: ‘Govt devising plan to plant 10 bn trees across the country’

Unattended Pirowal Forest in a shambles