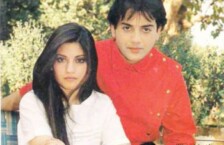 LAHORE-Singer Zoheb Hassan has warned that her late sister, Nazia Hassan’s ex-husband is attempting to make a film on her and anyone ‘entertaining’ him will be sued.

The Pakistani pop icon died on August 13, 2000, at the young age of 35, in London, following a prolonged battle with lung cancer.

Zoheb, who sang along with Nazia, said on Twitter, “Our family has come to know that Nazia’s ex-husband is trying to make a film on her life so he can feature himself and profit from her name and fame. Anyone entertaining this individual shall be duly and legally sued by our family as he has no legal right or basis to do so.”

Nazia had gained immense popularity through Pakistan Television’s (PTV) programme Sung Sung and shot to unexpected fame to become one of Pakistan’s most famous celebrities in the 1970s and 80s — a pride for the country.

The News International: Nazia Hassan’s ex-husband to make a film on her; Zoheb Hassan opposes