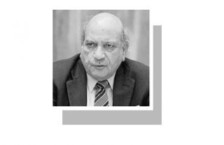 WHY is the PTI government keen to revive the N-League scheme to bring the press under a Pemra-like law? Is it because the proposed law is one of the most regressive measures against the print media devised in over a hundred years?

In 2017, the press fraternity protested vigorously against a draft law to set up a Pakistan Print Media Regulatory Authority, and replace the Press Council Ordinance and the Press, Newspapers, News Agencies and Books Registration Ordinance, both of 2002. The then minister of state for information denied her ministry’s role in drafting the bill, and she might have been right. In any case, the idea was shelved. Now the government has circulated among some of the stakeholders a plan to make a law to set up a Pakistan Media Regulatory Authority that will “provide for the development of electronic, print and digital media”.

This expanded version of the 2017 bill deserves to be rejected for a number of reasons. First, instead of revealing the whole draft of the bill, the government has only disclosed a licensing system to control the electronic, print and digital media and the composition of the authority that will administer it. This, along with honeyed declarations about improvement in “standards of information, education and entertainment, consolidation of different laws into a single enactment, and online facility for disposal of matters that will save applicants from running from pillar to post”. But the document does not include any information about the terms of licences, the punishments for any breaches, or any system of appeal from the proposed authority’s punitive orders, except for a passing reference to the possibility of the federation’s seeking a province’s views while proceeding against a licensee. The teeth of the authority have been concealed.The proposed legislation will deprive the press of the rights won by it over the past 70 years.

Both attempts to control the media (the drafts of 2017 and 2018) proceed from the fallacious assumption that the Pemra Act is an ideal law and that it can be extended to the print media. The summary powers given to Pemra to tame the electronic media are violative of the fundamental right to freedom of expression and we will deal with this matter some time later. At the moment, we are concerned with the grave threat to the print media, which is a different kind of fish.

The move to bring newspapers (and presumably books and other publications) under a licensing system must be resisted as it is in conflict with Article 19 of the Constitution (freedom of the press and freedom of expression) and basic human rights, and seeks to extinguish the right to print and publish traditionally available not only to publishers of newspapers but to all citizens (authors of books, etc).

The system of regulating the print media in vogue since the mid-19th century has been based on any citizen’s (originally any person’s) right to publish a newspaper or a periodical journal. The only condition is that he informs the district authority of the name and address of the printer and publisher, so that the liabilities for a breach of the law could be fixed. This process was described as filing a declaration, which was distinguishable from a licence.

The declaration became authorisation to publish when the district magistrate authenticated it. Authentication could be declined for a few technical reasons, and cancelled for a breach of the relevant press law. Getting a new declaration in place of a cancelled one was no problem until Independence.

Post-Partition, provincial governments in both wings of the country abused the provisions of the Press Act of 1931 to suppress dissent. The act was an emergency law enacted by the colonial rulers for a short period, but it remained in force in Pakistan until 1963. The stringent law introduced that year by the Ayub regime placed many curbs on newspapers. United action by editors, proprietors and journalists, including a one-day strike, forced it to issue another, somewhat milder, ordinance the same year, which lapsed many times and stood revived again and again until it was replaced in 2002.

The Ayub regime made authentication of the declaration extremely difficult but, in theory, a citizen’s right to publish was not erased. To undo the regime’s many attacks on the print media, including the creation of the infamous Press Trust, the authors of the 1973 Constitution took the extraordinary step of specifically mentioning freedom of the press while guaranteeing freedom of expression in Article 19.

The right to publish began to be informally denied by Gen Zia who converted, without any legislation, the declaration into a licence that he alone could grant.

The Federal Shariat Court and eventually the Supreme Court came to the rescue of the press and struck down the power to indefinitely delay authentication of a publisher’s declaration. Since 1990, the law is that if a declaration is not rejected/authenticated within three months, it will be deemed to have been authenticated. The right to publish has never been abrogated.

The proposed legislation will deprive the press of the rights won by it over the past 70 years. It amounts to depriving the people of a right that holds the key to many other rights.

In the last three paragraphs, the authors of the document express concern about unemployment in some departments, and suggest avoidance of the federation’s conflict with the provinces by taking the latter on board before the new law is drafted. The government is advised against giving impression of authoritarianism, because centralisation is against the spirit of democracy and the media might protest.

All languages have many expressions about this kind of doublespeak. Mock concern for rights will not wash away the mischief in the move to tighten thought control.