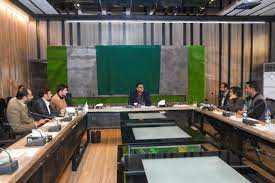 ISLAMABAD: Minister for Information and Broadcasting Chaudhry Fawad Hussain Friday underlined the need for responsible court reporting to ensure rule of law in the country.

In a meeting with a delegation of the Press Association of the Supreme Court (PAS), he said irresponsible and wrong reporting not only deprived people of correct information but also affected supremacy and prestige of the law.

He urged the court reporters to promote responsible journalism in the country to ensure the protection of the fundamental rights of the people and the dignity of the judiciary.

He said court reporting was as important as cases pending before courts and in dozens of cases courts took suo moto notices over media reports. “Every one must respect the judiciary,” he said adding that the courts should take suo moto notices on authentic news.

The training of court reporters was imperative as legal journalism involves both journalism and law, he said.

Fawad said the government would develop a strategy in collaboration with journalist unions to train the court reporters for demonstration of responsible reporting.

He said the government was providing health cards to the journalists on a priority basis.

He congratulated the newly elected body of the association and assured them of his full cooperation to address their grievances.The delegation was comprised of president PAS Raja Mohsin Ijaz, secretary-general Adeel Sarfraz and other office-bearers.