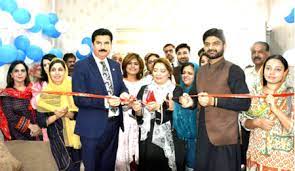 Over the past five years, SSDO has been involved in the promotion of gender equality and women’s rights by engaging in several projects and advocacy efforts, as well as several trainings of the media on reporting of social issues.

The National Press Club has a designated a room for women journalists to sit and do their research and writing.

To assist the Press Club, SSDO helped renovate the room and women’s toilet, so that it would become more comfortable and welcoming than before, including the installation of new ACs, paneling and new sofas.

Speaking on the occasion, Syed Kausar Abbas, Executive Director SSDO said appreciated the National Press Club for having a women-only room for female journalists. Keeping in view the dire need of women friendly separate space, SSDO decided to provide support to the NPC and help renovate the “Women journalist room.

He said that SSDO was continuing initiatives to build the capacities of female journalists, promoting women-friendly workspaces and advocating for women’s labor rights.