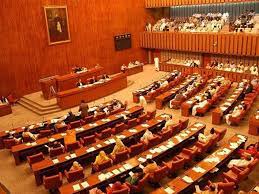 ISLAMABAD: The Senate’s Standing Committee on Information and Broadcasting on Wednesday unanimously approved a bill, “The Access of Media (Deaf and Dumb) Persons Bill, 2022”.

The Committee meeting was chaired by Senator Faisal Javed. The committee approved the bill moved by Senator Saleem Mandviwalla.

The bill is aimed at taking the steps to ensure special persons’ access to the media.

Senator Mandviwalla gave a detailed briefing to the committee.

Mandviwalla said the word “dumb” had been removed from the bill as some committee members had expressed reservations in that regard.

He pointed out the growing sense of alienation among the special persons who could not watch dramas and listen to the news on television channels.

The senator sought the support of the Ministry of Information and Broadcasting and the Pakistan Electronic Media Regulatory Authority (PEMRA) for implementing the bill once it became the law after approval from the relevant forums.

The secretary for Information and Broadcasting and the PEMRA chairman vowed full support for its implementation.

The director-general Pakistan of Broadcasting Corporation (PBC) briefed the panel about the issue raised by Senator Irfanul Haque Siddiqui regarding cutting down trees within the premises of Radio Pakistan, Rawalpindi.

He presented the report on the matter which was rejected by Senator Irfan who urged the committee to inquire into the cutting down of trees. The senator asked the PBC DG to share the complete details including market value, kinds and number of trees which were cut down so far.

Committee Chairman Faisal Javed summoned the officials of the Environmental Protection Agency (EPA) and the relevant department of the Punjab in the next meeting so that the matter could be looked into.

The committee was also briefed on the actions taken against some journalists and anchorpersons. The chairman took exception to the matter and directed the departments concerned for implementing the law for journalists’ protection in letter and spirit.

The committee chairman also directed the Information Ministry to submit the details of advertisements given to the electronic and print media in the tenures of different governments.

Other Sources: The Nation, the Express Tribune, the News