Why was PM Imran Khan’s conversation with journalists during his Naran visit censored? 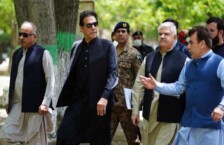 Prime Minister Imran Khan’s media talks are quite frequent and Pakistani media picks it up even more frequently.

Strangely enough, however, a conversation with journalists by the premier on his recent visit to Naran was censored and went on air an entire day after the PM’s visit.

So why the censorship?

One of the “problematic” questions asked by a group of journalists was about the compensation money promised to the victims of the October 5, 2008 earthquake in northern Pakistan which flattened Balakot.

Balakot was a town that was home to 30,000 people, about 160km north of Islamabad. The eventual death toll from the districts around the town was put at 73,000.

More than 12 years later, the earthquake survivors are still struggling to rebuild their lives. Some still live in shelters. The compensation under their name was taken to other cities by previous governments. PM Khan was asked about this, but he reportedly answered that he “had no clue about it”.

Another question was about the lack of infrastructure development in KP despite the PTI being in power in the province for eight years now. People want to visit the northern areas, but there has been little to no development and no new tourist spots have been opened, said one journalist.

Geo News raised a question about the dysfunctional role of the Pakistan Tourism Development Corporation in developing tourism despite the PTDC taking over all the guest houses of the northern areas and the premier making statements countless times about tourism being the key to develop Pakistan’s economy.

The premier was also asked about the KP public’s sentiments of feeling ignored and neglected as compared to Punjab. To this, PM Khan didn’t give much of a response and instead directed the conversation towards the KP CM, saying that he was doing a great job.