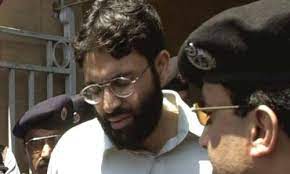 ISLAMABAD: The US warned on Wednesday it would not allow a man who was convicted and later acquitted in the 2002 murder of American journalist Daniel Pearl to evade justice after a high court ordered his release.

The warning from acting US Attorney General Jeffrey Rosen comes days after the Sindh High Court overturned a government detention order that Ahmed Omar Saeed Sheikh, the key suspect in Pearl’s slaying, should remain in custody.

Sheikh was convicted for his role in helping lure Pearl in January 2002 to a meeting in Karachi, during which he was kidnapped. Pearl, 38, was killed the next month.

A gruesome video of Pearl’s beheading was sent to the US Consulate.

Sheikh, who was on death row for 18 years, was acquitted earlier this year of murdering the Wall Street Journal reporter from Encino, California. But he has been held while Pearl’s family appeals.

“We understand that Pakistani authorities are taking steps to ensure that Omar Sheikh remains in custody while the Supreme Court appeal seeking to reinstate his conviction continues,” Rosen said in a statement released by the US State Department.

“The separate judicial rulings reversing Sheikh’s conviction and ordering his release are an affront to terrorism victims everywhere,” Rosen said.

He praised Pakistan for appealing the rulings to ensure that Sheikh and his co-defendants are held accountable.