US citizen also implicated in case against Geo TV

KARACHI: A local court ordered the registration of a case against Geo TV employees, including an American citizen.

The court of the District and Sessions Judge (South) Ahmed Saba passed an order to register a case under Section 22-A after a local lawyer, Mirza Asif Beg, had moved an application seeking orders for the registration of a case.

The applicant had claimed that patron-in-chief George C Zoley and others had violated the rules and provisions dealing with the sanctity of sacred personalities that hurt the feelings of Muslims.

According to police, after the registration of the FIR, the investigation has been handed over to Meethadar Police Station, while the petitioner lives in Liaquatabad.Besides Karachi, cases were also registered in Gujranwala, Lahore, Hafizabad, Shekhupura and Chishtian.

In Lahore, Old Anarkali Police registered a case against Geo officials on a report of Sardar Aftab Advocate under Section 298. The FIR number is 215.Meanwhile, filing of petitions in the courts against Geo TV continued as yet another petition was filed in the Islamabad High Court (IHC) on Wednesday by a lawyer Ch Tanweer Akhtar seeking suspension of the Geo television transmission and complete ban after an inquiry if the TV channel is found guilty.Justice Shaukat Aziz Siddiqui of the IHC would hear this petition today (Thursday).

In Lahore, meanwhile, Additional District and Sessions Judge Nadeem Ansari adjourned the hearing by May 28 of a private complaint filed by ARY anchor Mubashar Lucman against Jang Group officials over the charges of launching a vilification campaign against the anchor. 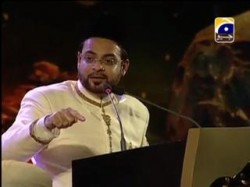