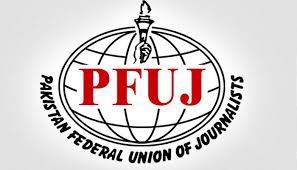 KARACHI: The three-day meeting of the Federal Executive Council (FEC) of the Pakistan Federal Union of Journalists (PFUJ) under the chairmanship of Shahzada Zulfiqar, the president of the union, deliberated upon a host of issues confronting the media industry, particularly the journalist community and media workers in Pakistan, says a press release on Tuesday. It expressed collective alarm over the continued systematic erosion of media rights, denial of freedom of expression and intimidation of voices of dissent by both non-state and state actors.

The meeting observed that deepening threats to the constitutional right of freedom of speech and independence of the press is further affecting professional responsibilities of media workers impeding accountability and aggravating governance issues, thus relegating Pakistan down to the bottom of global rankings on media and democracy. The council particularly referred to the recently released Freedom Network’s Annual State of Press Freedom Report 2022 according to which at least 86 cases of attacks and violations against media and its practitioners took place in Pakistan in just one year from May 2021 to April 2022.

The Council expressed its concern at such blatant violations of fundamental right of expression. It also showed serious concerns over the recent FIA actions to restrict media freedom through courts. The Council pointed out that PECA needs to be more accommodating to ensure freedom of expression and prevent violations of this fundamental right. The PFUJ reiterated its resolve to resist any designs to gag the media and punish journalists.

Retrenchments, enforced ban on certain journalists and anchorpersons, abductions, arrests, and killings of journalists must be prevented by the new government. The FEC expressed alarm at the blatant attempt to squeeze the media of financial viability through withholding of payments of previous public sector advertisements and an undeclared ban on new public sector advertising for certain media houses. Council considers it shameful that Pakistan still has the dubious distinction of being one of the most dangerous countries for media professionals.

The FEC meeting once again urged the government to immediately implement the 8th Wage Board Award and urged the owners to fully reverse the pay cuts imposed during Covid-19 and financial crisis of media industry.