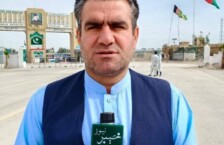 Pakistan Press Foundation (PPF) is alarmed by the arrest of two Pakistani journalists in Kandahar, Afghanistan. We welcome the news of the release of the two personnel of Khyber News television channel — reporter Matin Khan and cameraperson Muhammad Ali — and urge the Taliban to ensure the safety of the media covering developments in Afghanistan.

PPF calls on media houses in Pakistan sending reporters for coverage in Afghanistan to ensure they are provided with the necessary permissions, training and  safety equipment before being sent on assignment.

Khyber News Chief Controller News Mubarak Ali told PPF that Taliban had released both the journalists after completing their investigation on August 27.  Ali said that he had sent the two for reporting in Kandahar on a visit visa, adding that people from Chaman and Kandahar could move without any visa requirements.

Ali said that the Pakistan Embassy in Afghanistan had played a vital role in resolving the matter. Ali says that he will send the journalists back to Kandahar with the proper documents for reporting.

According to Khyber News Quetta Bureau Chief Jabbar Shah, the journalists were detained by Taliban in confusion and due to the current situation in Afghanistan.

Zaman said the journalists were released by the Taliban after completing their initial inquiry. They returned to Chaman on August 27. Khan confirmed to PPF that he is now home

PPF welcomes the release and timely resolution of the matter, however, we urge media organisations to be more proactive in their safety protocol to avoid such situations. The proper documentation and safety gear of journalists being sent into a dangerous environment should be checked prior to such untoward incidents, not after, alongside a complete risk assessment.