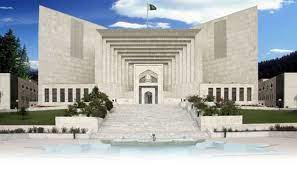 ISLAMABAD: The Supreme Court (SC) on Monday ruled for protecting the fundamental rights of the people as well as ensuring Freedom of Press, and Freedom of Expression enshrined in the Constitution besides exercising suo motu jurisdiction under Article 184(3).

A three-member bench of the apex court headed by Justice Ijazul Ahsen and comprising Justice Muneeb Akhtar and Justice Qazi Muhammad Amin Ahmed took up a suo motu case regarding harassment of journalists.

The court also sought a report from the Islamabad High Court (IHC) registrar regarding the status of pending cases of media persons. Four applicants including Aamir Mir, Abdul Qayyum Siddiqui, Asad Toor and Imran Shafqat withdrew their applications. However, Amjad Nazir Bhatti, President Press Association of the Supreme Court, vowed to continue with the matter regarding protection of fundamental rights of the media persons.

During the preliminary course of the proceedings, applicants Abdul Qayyum Siddiqui, Aamir Mir and Asad Toor were present in the courtroom. “Qayyum Siddiqui, you have withdrawn your application,” Justice Ijazul Ahsen asked him.

“Yes, and I have to say few words,” Qayyum Siddiqui replied. “But you have approached this court placing an application seeking remedy against the harassment of journalists,” Justice Ijazul Ahsen said, and continued that the chief justice had invoked suo motu jurisdiction under Article 184(3) and once the it is invoked then there is a question of protecting the fundamental rights of the citizens and that’s what the court is doing right now.

“The court has taken cognizance of the matter as to how the fundamental rights have been violated and we would satisfy ourselves as guardians of the court and Constitution,” Justice Ijazul Ahsen remarked.

If you don’t want to proceed, OK good enough, but still we would proceed in fulfilment of our obligation and would call all the stakeholders and respondents and will ask them if any fundamental rights of the people have been violated,” Justice Ijazul Ahsen continued. The judge further said that if anyone participated and became a party in the matter, the court would welcome them.

“You had approached this court so boldly and now withdrawing your application, but we will have to exercise the suo motu jurisdiction invoked by the chief justice,” Justice Muneeb Akhtar asked Qayyum Siddiqui. Qayyum Siddiqui submitted that whatever happened during the last week, it was never witnessed in the history.

Siddiqui then started reading out his application stating that the undersigned is applicant in the titled case and want to withdraw his application. “On Judgment Day, all victims will get justice against those who had wronged them and predators will be punished by Almighty Allah,” Siddiqui read out.

He said that he has decided to leave this matter to Almighty Allah alone. “Any inconvenience caused to this court is regretted,” he said Meanwhile, Amjad Nazir Bhatti, President PAS, came to the rostrum. “Do you want to assist us,” Justice Qazi Muhammad Amin asked Bhatti.

Justice Ijazul Ahsen recalled that the PAS president had placed an application before the court and had made a statement as well regarding the enforcement of fundamental rights. “Keeping in view our fundamental rights, people from far flung areas use to approach us for taking up the matter with the apex court,” Amjad Bhatti told the court.

“It is an established fact that the media is the conscience as well as voice of the nation and there is no question about it,” Justice Ijazul Ahsen remarked, saying that they are well aware of grievances.

“We will fulfil our obligation independently,” Justice Ijazul Ahsen added. Justice Qazi Muhammad Amin observed that they are aware of the fact about the condition in which the families of media persons are living, and “it is our responsibility to ensure the safety of media persons”.

The judge further observed that no meaningful steps have been taken against the violators of fundamental rights. “If you speak the truth, nobody can stop you,” Justice Ijazul Ahsen asked Amjad Bhatti.

Justice Ijazul Ahsen recalled that when a matter of pending salaries of the media persons came to the court they called the media owners and stood by the journalist community and resolved the issue.

When Aamir Mir and Asad Toor came to the rostrum to file their application for withdrawal, Justice Qazi Muhammad Amin Ahmed asked them to file it with the office the court. “We are here to protect the rights of the media persons but as I as a judge can’t do politics, the journalists can’t do it as well,” Justice Qazi Amin Ahmed remarked. The court adjourned the hearing until September 15.