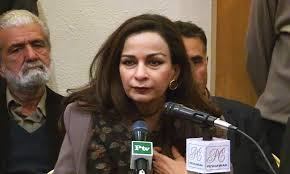 ISLAMABAD: Slamming the draconian censorship laws, parliamentary leader of the PPP in the Senate, Senator Sherry Rehman said muzzling the truth and controlling the narrative is unacceptable in a democratic society.

“These new rules are just another attempt by the government to infringe upon peoples’ privacy and strengthen its surveillance powers,” she said Monday. Highlighting PTA’s untrammeled powers, Sherry said under the guise of these rules, the government has broadened PTA’s powers, and is attempting to censor criticism and opposition. “Now PTA will get to interpret PPC sections without any check and balance and decide what content it considers unlawful, while playing the role of judge, jury and investigator,” she added.

She said it will also have the authority to review appeals on the restriction or blocking of online content even before the high court can get involved. PTA also has the power to regulate the content being shared online and can get it removed within a day.

She said the Removal and Blocking of Unlawful Content (Procedure, Oversight and Safeguards) Rules, 2020 — will give government the power to monitor and restrict digital content as well as punish social media companies that don’t comply with government requests.

Besides social media companies, she said these rules also apply to telecom operators and broadband operators. “By passing these rules, the government has basically given itself a legal cover to issue blanket bans on digital content,” she further added.

She said this will restrict and control what is published on social media, and the government can demand to block and regulate content. “Such acts will only discourage internet companies from investing in Pakistan and will negatively impact our economy and employment sector,” she said. She said such unconstitutional acts speak volumes for the state’s desperation to monitor citizens’ movements online. “What the government should do instead is to focus on developing a strong regulatory framework and protecting citizens’ fundamental rights which they casually violate through such rules”.