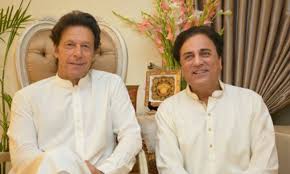 Interestingly, the appointment was made in apparent haste as the federal cabinet had in its meeting last week considered a summary for his appointment but did not endorse his induction as PTV chairman.

The cabinet had directed the Ministry of Information to “resubmit the summary, in line with the following observations: i) the composition of the Board shall be on the pattern of previous Board where independent directors/private sector members were in majority; ii) the appeal [against Islamabad High Court order of sacking Arshad Khan and other PTV directors] may be vigorously pursued and independent directors/private sector members from the previous Board shall be re-inducted in the new Board, where possible; and iii) Shahzada Naeem Bukhari be included in the Board and nominated as Chairman.”

The information ministry had submitted the summary for appointment of three independent directors of PTV, recommending Naeem Bukhari, chartered accountant Syed Waseem Raza and prominent writer Asghar Nadeem Syed as principal candidates. Mr Bukhari and Asghar Nadeem Syed are over 65 years old and, therefore, the ministry had sought relaxation from the federal cabinet regarding their age.

However, in contradiction to the observations by the cabinet regarding resubmission of the summary for the appointment of directors and chairman of PTV, the information ministry on its own notified Mr Bukhari as chairman on Monday.

The notification read: “The Federal Government is pleased to appoint Shahzada Naeem Bukhari as Independent Director of Pakistan Television Corporation Board.” It further stated: “The Federal Government has also approved nomination of Shahzada Naeem Bukhari as chairman PTVC Board in line with the Pakistan Television Corporation…The chairman shall, unless he resigns earlier, hold office for a period of 03 years. The board of directors, PTVC, is directed to ratify his nomination as chairman.”

It may be mentioned that the Islamabad High Court had in September set aside the appointments of PTV chairman Arshad Khan and board members Zhouhair A. Khaliq, Prof Ijazul Hassan, Syed Mohammad Ali Bokhari, Mian Yousaf Salahuddin, Rashid Ali Khan and Farman Ullah Jan.

In its 42-page decision, the court directed that in future the federal government should determine salaries and benefits of PTV employees in consultation with the finance ministry.

However, an earlier IHC judgement had made it mandatory for the government to advertise the post before making any appointment in PTV.

When contacted, information secretary Zahida Parveen attended the phone call but did not comment on the appointment of Mr Bukhari as PTV chairman.