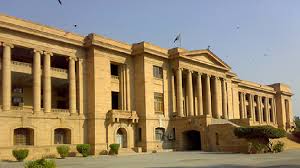 KARACHI: “Human rights deal with getting rid of exploitation of people who may not be that well-placed in society for it is their rights that you need to care about the most,” said retired Justice Shaiq Usmani during a dialogue on the human rights situation in Sindh organised by the Sindh Human Rights Commission (SHRC) at the launch of their fourth annual report at a local hotel on Thursday.

“The Constitution of Pakistan provides for common and ordinary people. Article 3 of the Constitution talks of elimination of exploitation. It says that the state shall ensure the elimination of all forms of exploitation and the gradual fulfilment of the fundamental principle, from each according to his ability, to each according to his work. In fact Article 31 to Article 40 are all great principles of policy but nobody follows them. They are just there,” said the retired judge, who added that when he pointed out the matter to the chief justice of Pakistan, he was asked to draft a petition for it.

“So I drafted a petition, which I knew needed to be a Constitution petition from an aggrieved person, who I found too and asked if I could use his name, which happened to be Nur ul Rahman. But this Constitution petition of 2018, which is about giving the right to a decent life where the needs of the poor are fulfilled, was initially rejected. When I brought this to the notice of the chief justice, he overruled the objection but it is just laying there on the Supreme Court’s list.

“I am sure that had the petition been filed by an important person, it would have been heard by now. So I request all important people to file an application to be made a party to it,” he said.

Justice Usmani suggested that the Sindh High Court should be given the power to also take suo motu notices so that all violations of human rights get taken up because “the only order here which is taken seriously and obeyed is a judicial order”.

While speaking about the challenges faced by human rights institutions in Sindh, Anis Haroon, member, National Commission for Human Rights (NCHR) Sindh, said that Sindh was a progressive province when it came to legislation but legislation alone was not enough. “We have so many laws to combat human rights violations and yet the situation is not improving. We read of so many crimes in the newspaper, but they are only the ones that were reported. There are also so many that have not been reported because the common person is afraid to go to [the] police station to report an injustice,” she said.

Bringing up the matter of the NCHR Sindh being independent from the government she said that it could not do its work of monitoring government violations while being under the ministry’s thumb, that would also

control its budget. “The NCHR was for the accountability of the government but we risk becoming persona non grata if we dare to [do] that now,” she said.

“The laws that the legislators have come up with may be good, but [they have] no proper mechanisms and referral systems. Human rights situation will improve when we can see and understand the repercussions of our laws and how they affect the people. So there is a need to develop proper structures too besides coming up with new laws,” she pointed out.

Karamat Ali, the executive director of Piler, observed that the SHRC was only there in Sindh and not in other provinces of Pakistan. “Yet, no one in the other provinces demands it. It is because even the most educated of people here have not read the Constitution of Pakistan. To remedy this making the reading of the Constitution, its first 40 articles at least, should be mandatory in schools,” he said.

Lawyer and human rights activist Maliha Zia Lari also said that it was important to have a legal framework for a law. She said that sometimes a law was ahead of society but it also played a role in social change.

Dr Khatu Mal Jeewan, special assistant to the chief minister for human rights, said that Sindh was able to come up with most legislations because it had the support of its leadership. He said the government would be at the forefront for betterment of people and human rights.

Earlier, retired Justice Majida Rizvi, chairperson of the SHRC, said that the idea of an independent human rights commission was still nascent in nature hence there was a lack of awareness of it.

But, she added, there was a need for effective response mechanisms in the province. About this year’s annual report, she said that the year had been successful as besides responding to human rights violations they have also held capacity-building workshops for police. “I hope the commission is empowered fully to be able to fulfil its mandate,” she concluded.Asad Ashraf Malik and Riaz Soomro from the government also spoke.