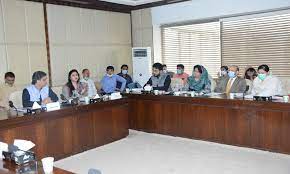 ISLAMABAD: Chairman of the Senate Standing Committee on Information Senator Faisal Javed and the panel’s other members announced on Tuesday that they would reject the Pakistan Media Develop­ment Authority (PMDA) bill if they were not convinced by the government about the need for bringing such a bill.

Senator Javed, who is also a leader of the Pakistan Tehreek-i-Insaf, and members of the panel expressed their anger over the fact that they had not been provided any copy of the PMDA bill despite repeated requests.

The committee members, irrespective of their party affiliations, conveyed their annoyance to Minister of State for Information Farrukh Habib and Information Secretary Shaheera Shahid as they briefed them on the importance of the bill.

“When will the draft of this bill be presented before the Senate standing committee?” Senator Javed asked, adding: “You have to convince us over the PMDA and tell us about the need for bringing such a bill.”

The chairman of the committee told the information secretary that the bill would be rejected “if you fail to convince us”.

The members of the committee also asked the secretary why such an authority was needed. “Would the rights of working journalists be protected after the establishment of this authority?”

Mr Habib informed the committee that bills were first introduced in the house and then forwarded to the committee from there, but the government was discussing the PMDA bill in the committee and with stakeholders, including several organizations of journalists and members of press clubs.

He claimed that the National Assembly’s Standing Committee on Information had also been briefed on the bill.

“There are many misunderstandings about the bill,” the minister said, adding that there were no corporal punishments mentioned in the bill, but some penalties have been introduced in it.

The minister claimed that fake news was a “serious problem” in the current era and the government wanted to tackle it through the bill.

He said the government had paid Rs50 million to the print media and there were no arrears of electronic media pending with the government.

Senator Irfan Siddiqui pointed out to the minister that journalists were suffering as there had been no chairman of the ITNE for the last six months and yet the government claimed to be sympathetic towards journalists and the media.

In a related development, Chairman of the National Assembly’s Standing Committee on Information Mian Javed Latif announced that he would turn down the PTI government’s proposed PMDA bill in the upcoming meeting of the committee.

“The freedom of expression cannot be contained just by pressing a single button,” Mr Latif said while speaking at the Meet the Press program, jointly organized by the National Press Club (NPC) and the Rawalpindi-Islamabad Union of Journalists (RIUJ) here on Tuesday.

“We will not let the bill pass through the standing committee as this issue is related to the entire nation,” he said, adding: “If the government tries to control everything, including media, courts of law and even elections, I fear another tragedy like that of East Pakistan may occur.”