ISLAMABAD: The Senate Standing Committee on Information and Broadcasting is scheduled to consider a bill aimed at excluding both the houses of parliament from the ambit of ‘Right of Access to Information Act’ and subsequently to keep its information confidential.

As per agenda of the meeting to be held on Monday, the standing committee will deliberate upon the “The Right of Access to Information (Amendment) Bill 2020”, referred by the House on January 25.

As per statement and objectives of the bill, it seeks privacy for any information related to the National Assembly and Senate.

It may be mentioned that the Bill was introduced after the Pakistan Information Commission (PIC) issued a direction to the chairman Senate to make public the record related to the sanctioned strength, vacant positions and inductions.

Moved by PTI lawmakers, bill seeks privacy for any information related to National Assembly and Senate

PIC in December 2019 allowed the application filed by a citizen, Mukhtar Hussain, seeking information about (i) total sanctioned strength of staff members of Senate against different positions/pay-scales i.e. from pay scale 1 to 22. (ii) total vacancies in the Senate against different pay-scales/positions, (iii) number of staff members who are not regular but have been engaged on daily-wage basis, (iv) posts created anew since January 1, 2017 etc.

The Senate secretariat did not respond to repeated notices of the PIC.

Hence, the commission announced the application in ex-parte proceeding.

The commission ruled that “the requested information shows that it belongs to the category of information which public bodies are legally bound to proactively disclose under Section 5 (a) of the Right of Access to Information Act 2017.

The information which should have been proactively disclosed by the public body is being protected from sharing with a citizen and no response has been received from the public body even after two reminders and no one appeared in response to the two hearing notices issued by the commission.”

PIC allowed the application with a direction to the Senate secretariat to “provide the requested information to the appellant at the earliest, but in any case not later than 10 working days.”

The Senate secretariat did not comply with the direction and asked PIC to recall the order, saying that the chairman Senate had declared the information as classified.

PIC suggested to the Senate secretariat to file an appeal against the order before the appropriate forum if it deemed it an inappropriate order, sources privy to the development told Dawn.

While both the entities were corresponding to each other, the lawmakers of the upper house moved the bill to amend the Act.

The bill states that “secretariat of the Senate and National Assembly are constitutional bodies. Work of parliament is not only extremely significant but also highly sensitive. In view of constitutional sanctity provided to the secretariats of the parliament, Senate and National Assembly do not fall under definition of public bodies, similar to the Supreme Court of Pakistan which is not included in the definition of public bodies in the said Act.”

The bill proposed that the names of both the houses of parliament be omitted from the relevant subsection of the Act in order to maintain sanctity and privacy of these institutions. 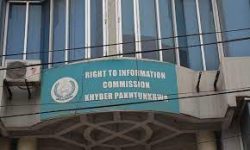 Khyber Pakhtunkhwa govt’s ‘Right to Information’ act is a milestone