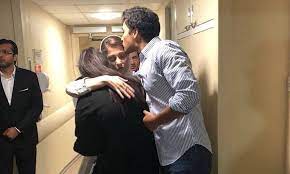 ISLAMABAD: The Pakistan Muslim League-Nawaz (PML-N) has announced that the party will sue the state-run Pakistan Television (PTV) for wrongly mentioning the name of Junaid Safdar, the son of Maryam Nawaz, in its report on the Pandora Papers.

Marriyum Aurangzeb, the party’s information secretary, alleged in a statement on Sunday that the PTI government had intentionally propagated a ‘fake report’ that Junaid Safdar owned five offshore companies. The report was broadcast to distract attention from members of the government named in the Pandora Papers, she added.

Marriyum Aurangzeb condemned the PTV for carrying the news, saying: “The king of fake news Imran Khan used the state television to run this false news.”

She said lawyers had already been told to pursue legal action against PTV for airing ‘this false and baseless fake news’.

The former information minister demanded that those who aired this news must apologize. She called upon Pemra to take immediate action in this regard.