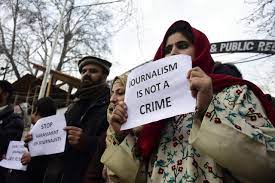 PESHAWAR: Special Assistant to Chief Minister on Information Barrister Muhammad Ali Saif on Wednesday said they were working to pass the proposed Journalist Protection Bill from Khyber Pakhtunkhwa Assembly to ensure the safety of journalists.

He was talking to a delegation of Pakistan Journalists Safety Coalition Khyber Pakhtunkhwa chapter. Freedom Network Chief Executive Iqbal Khattak led the delegation. Secretary Information Zakaullah Khattak, Director General Information Department Imdadullah, and presidents of the Peshawar Press Club and Khyber Union of Journalists were also present. He said the government would seek input from the working journalists while working on the draft of the proposed bill. He added the journalist community played a key role in highlighting the problems of the commoners as the media was the fourth pillar of the state. He said the govt would spare no effort to ensure the safety of the journalist while performing their professional duty.