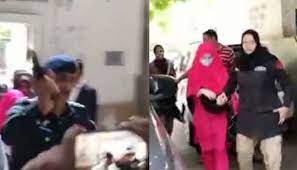 During the appearance of Dua Zahra in court on Wednesday, a police officer attempted to scare off journalists and threatened them with a pistol, Geo News reported

Dua Zahra was presented before judicial magistrate in the city court by police officers.

Footage shows that while Dua was being taken inside court, the police misbehaved with journalists. The men were in plainclothes accompanying investigating officer Saeed Rind, who also pulled out a pistol to scare the journalists and told them to stand back.

During the hearing, the court stated that the order to present Dua today was to ensure that the environment is right, and that she should not be presented until other court orders.

The judicial magistrate directed the public prosecutor to present Dua only when the court orders.