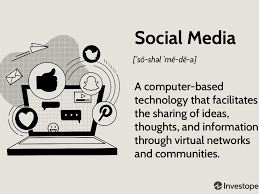 Social media has played a pivotal role in the world. It has made the world a global village. There is no denying that it has a number of merits and demerits as well. The first and foremost merit is that it is a source of knowledge and information. Every important news spreads in the world like a wildfire. Different people share their perspectives concerning different things. Secondly, it has made the communication easier. There was a time when people used to send letters to their dear and near ones which used to take weeks and in some cases even months to reach their destinations.

But now people can communicate with each other in no time. Social media promotes culture of every nation. It is also considered a source of entertainment. Before the emergence of social media, life was slow, dull and bored. Now social media has made the human life easier and enjoyable.

As every coin has two sides; similarly it has advantages and disadvantages as well. But it depends upon people’s thinking. As it is famously quoted that “There is nothing good or bad, but thinking makes it so.” One of the demerits of social media is that most of the people use social media websites excessively.

Secondly, people spread rumours and hatred through their hate speeches. Now social media is largely considered a threat to democracy. According to an international report, about 2100 Twitter accounts are involved in a social media propaganda campaign against Pakistan/ Army. No doubt that social media has played a remarkable role in the world, but it has also some severe demerits which need to be discussed and addressed so that people may not face any hazard.