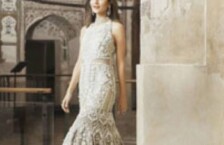 LAHORE: Reema Ahsan is set to showcase her latest collection ‘Daastan’ at Bridal Couture Week on 7th December. Established in 2006, Reema Ahsan is a renowned brand that has become synonymous with elegance, opulence and luxury, catering to the cosmopolitan woman.

Daastaan is a collection of everlasting pieces that can be passed onto generations. It symbolizes the freedom of today’s bride while remaining true to traditions. The intricately embroidered patterns on rich fabrics reflect the modernity of this collection and the ensembles.

Reema’s design philosophy has largely been influenced by her travel experiences and interests. Geometric prints and floral’s are patterns that she often incorporates in her work. Additionally, Reema loves to play with rich colours and bold designs, experimenting with different cuts and silhouettes that encapsulate the fusion of east and west.

Additionally, Reema loves to play with rich colours and bold designs, experimenting with different cuts and silhouettes that encapsulate the fusion of east and west.

“I often imagine designs on plain walls. Art really doesn’t have a boundary so it’s always better to think of all the elements in a blank space.”

She has participated in numerous shows around the World and has as loyal clientele that comes to her flagship store in Cavalry Ground. Renowned actress Hareem Farooq will be walking the ramp for the designer.