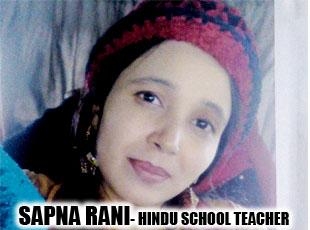 PESHAWAR: A missing Hindu female schoolteacher told a local judicial magistrate on Monday after recovery from Bahawalpur that her kidnapper had forced her to marry him after changing her faith and kept her unconscious for most of the time during captivity on refusal.

The teacher, who is around 25, was recovered from Khairpur tehsil of Bahawalpur late on Saturday after investigation officer of the case Shaheenullah Khan traced her location with the help of her cellphone and that of her alleged captor, Zahid Nawaz, a resident of Bahawalpur.

The accused managed to flee.

Investigation Officer Shaheenullah Khan produced the girl before the judicial magistrate to record statement under Section 164 of the Code of Criminal Procedure.

Ms Sapna had gone missing on Dec 21 while returning home from school in the jurisdiction of Paharipura police station. Police had registered a complaint lodged by Suresh Kumar, stated to be the teacher’s cousin.

Ms Sapna is a teacher at a private school, Peshawar Science Academy, situated on the GT Road near Ayub Flour Mills.

The kidnapping had created unrest among the local Hindu community and its leaders had appealed to the government to take notice of the incident and recover the teacher.

The investigation officer said the teacher had recorded almost similar statements with him and the magistrate.

Ms Sapna told the court that when she was returning home on the day of kidnapping, a car stopped near her and the accused person put a cloth dosed with intoxicant on her face causing her to fall unconscious.

She said she gained consciousness after a day and saw a man later identified as Zahid Nawaz present in the room.

The teacher said whenever she gained consciousness, the kidnapper used to put forward the same demand of marrying him after conversion to Islam.

She said on her refusal, the man often put intoxicant-dosed cloth to her nose.

The woman said as she remained unconscious most of the time, she was not sure whether she was sexually assaulted by the suspect or not.

The court ordered to conduct her medical examination.

The investigation officer told Dawn that this was a very challenging case for him and he conducted investigation on scientific basis as he acquired entire data of the teacher’s cellular phone.

He added that when he spotted the cellphone number of suspect Zahid, he then acquired data of his phone and traced his location.

The investigation officer said as the family of the teacher belonged to poor background he took it upon himself to recover her as the family was passing through a lot of distress.

He said prior to reaching Khairpur tehsil in Punjab, he visited several other locations and finally the exact location was traced.

The investigation officer, however, said as the house where the woman was kept was situated in the fields and police could be spotted from far away, it helped the suspect escape.