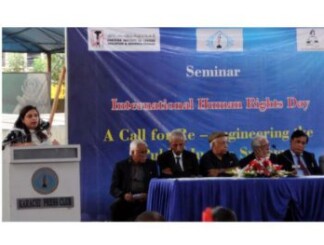 KARACHI: A rape survivor is invariably assaulted for the second time when she steps out from her home to get justice, said an advocate fighting for such cases.

“A survivor is raped a second time when she is questioned by the police. At every stage, she suffers and is not taken seriously,” said lawyer Asiya Munir of War Against Rape.

On Human Rights Day on Thursday, an awareness seminar, ‘The State of Survivors: Rape, Burn and Acid Throw Victims in Focus,” was organised by the Pakistan Institute of Labour Education and Research (Piler). The session was attended by nine people and only a few speakers spoke about the prevailing violence against women.

Speaking about the suffering of a rape survivor, Munir said that the medico-legal officer conducting the medical examination may write in her report that the survivor was ‘habitual’. In the court, the case may get delayed. The survivor faces lack of legal counselling and may be eventually blamed for the crime, she added.

In our society the survivors are blamed for the atrocities against them, said Piler executive director Karamat Ali, adding that it will take time to improve the situation. It is important to think of the ways violence can be eliminated from society, he claimed. “Pakistan is obligated to implement laws and make institutional arrangements,” said Ali, speaking about the international covenants of human rights that Pakistan has signed.

Calling for equality of human beings, he said that unfortunately women here [Pakistan] are not treated as equal to men, neither are religious minorities.

Madiha Latif and Ghausia Rashid Salam from Bolo Bhi gave a presentation on acid and rape survivors, saying that the survivors are considered taboo, and they are often asked what they did that led to the incident.

“Acid survivors find it difficult to come back in the society. Acceptance and rehabilitation is important to them,” pointed out Latif.

Speaking about the psychological impact, Latif said that the survivors feel terrified to leave their homes, commonly suffer from depression, and have suicidal thoughts. “They lose their will to live,” she added.

Former minister for women development Rubina Qaimkhani also attended the session, while lawyer Faisal Siddiqi who was one of the speakers couldn’t make it to the event because he was unwell.