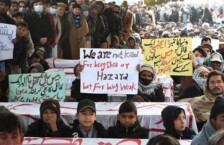 ISLAMABAD: On the call of the Pakistan Federal Union of Journalists (PFUJ), demonstrations were held across the country on Tuesday for protection of economic rights of journalists and media workers and freedom of the press.

The protests, held under the PFUJ’s slogan of “Enough is enough”, were attended by journalists, trade unionists and victims of retrenchment from media houses, including Radio Pakistan and Pakistan Television.

Speaking at a rally in front of the National Press Club in Islamabad, PFUJ’s Secretary General Nasir Zaidi condemned anti-media policies of the government. “Media houses, journalist community and politicians are being victimized in the name of the so-called fifth generation and hybrid warfare, which is damaging the basic fabric of the society,” he said.

Former Senate chairman Nayyar Bukhari told participants of the rally that the government had ruined the living conditions of the common man and it was taking unconstitutional steps by imposing censorship and denying freedom of expression and speech.

Protest rallies were also held in the four provincial capitals and other cities and towns of the country.

A demonstration organized in front of the Karachi Press Club by the Karachi Union of Journalists was addressed by journalists, labor leaders and representatives of CBA unions of various media houses.

A similar rally was held by the Sukkur Union of Journalists.