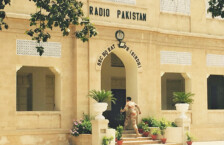 ISLAMABAD: Mohammad Asim Khichi, a senior grade 20 officer of Ministry of Information and Broadcasting, has been appointed as director general of Radio Pakistan.

He has also been given additional responsibilities of director general, Cyber Wing.

On his arrival at the head office of Radio Pakistan in Islamabad on Thursday, he was given a warm welcome by officials and senior officers of the Radio Pakistan Union.

After assuming the charge, Mr Khichi said that employees of Radio Pakistan are precious assets of the nation and operations at the place will be improved as per modern standards.

He said this is the era of broadcasting and Radio Pakistan will emerge in the world as the voice of Pakistan. He also visited various departments of Radio Pakistan on the first day, where he was given a detailed briefing.