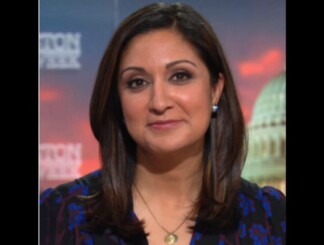 Pakistani-American journalist Amna Nawaz has been named the chief correspondent for one of USA’s widely watched and respected news shows, PBS NewsHour.

Earlier she served as the national correspondent, now in her new role she will also serve as the White House Correspondent. Amna Nawaz joined the channel as a correspondent and has since co-moderated PBS NewsHour’s Democratic Primary Debate with Politico in December 2019. She is also the first Asian American and Muslim American to moderate a presidential debate. Amna is the daughter of Shuja Nawaz, a former Pakistan Television (PTV) journalist and currently a Distinguished Fellow, South Asia Center, at Atlantic Council, a Washington-based think-tank.  Before that, she served as a foreign correspondent at NBC News, reporting from Pakistan, Afghanistan, Syria, Turkey, and the broader region.

In addition to her new roles, Nawaz will co-anchor and anchor some prime time and other special coverage. Before joining NewsHour, Amna Nawaz had worked for ABC News, anchoring breaking news coverage and leading the network’s digital coverage of the 2016 elections.

Asked about the effect of her being an Asian American woman on her career, Ms. Nawaz told Jade magazine.com, “Sure, in the parts of the world I’ve covered, there have been a lot of times when I’m the only woman at the protest, or in the briefing room, or on the military embed.”

“I’m certainly not the first woman to be in any of those places and was lucky to have the support and encouragement of female journalists before me who’d been there and done that.”

But she acknowledged, “I’ve had people make assumptions about me – because I’m a woman because I’m Asian because my family’s from Pakistan because I’m Muslim – but I can’t control what others think. All I can do is bring my whole self to this job, to report the stories as I see them, and try to treat others’ stories with the same care and respect I’d want someone to treat mine.”

Nawaz began her career as a Nightline Fellow at ABC News. When the Sept. 11 attacks happened just weeks into her first job, Nawaz was allowed to work on one of the most important news events in recent times, which set the precedent for the rest of her career.

She’s investigated the impact of the Trump Administration’s immigration policies, including following the journey of a single toddler as she left her home in Mexico, was separated from her family at the U.S. border, and later reunited with her family several weeks later. She also regularly covers issues around detention, refugees and asylum, and migrant children in U.S. government custody.

She was NBC’s Islamabad Bureau Chief and Correspondent for several years and was the first foreign journalist allowed inside North Waziristan. She covered the Taliban attack on Malala Yousafzai, the U.S. raid on Osama bin Laden’s compound, and broke news in a series of exclusive reports on the impact of U.S. drone strikes.

Ms. Nawaz reported for the network’s investigative unit, covering the U.S. housing crisis and the British Petroleum (BP) oil spill, and also covered the election and inauguration of Barack Obama, the earthquake in Haiti, and Hurricane Katrina.