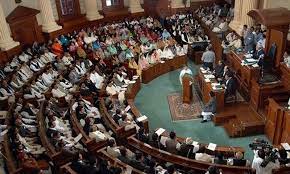 LAHORE – The Punjab Assembly on Tuesday amended the Punjab Privileges (Amendment) Bill, removing the clauses that recommended jail terms for journalists for reporting things that may violate privileges of the legislators.

PML-Q’s Sajid Bhatti, who was also one of the movers of the controversial bill, suggested removing anti journalist clauses that were unanimously passed by the House. The House amended 11C, excluding media persons from the list of those who could be punished with imprisonment and fine for violating the privileges of the MPAs. Journalist organization held protest demonstrations against passage of the controversial private bill. As the journalist organizations refused to accept deletion of media persons from the list through discretionary power of the PA Speaker, the treasury agreed to remove the controversial clauses through the House.  Speaker Chaudhry Parvez Elahi, who was chairing the sitting, said that by amending the [controversial] law all reservations of the journalist community stand removed.

Meanwhile, the opposition PML-N through points of order demanded restoration of local governments as per recent verdict of the Supreme Court. PML-N’s Malik Ahmed Khan said that by not restoring the local bodies the government was committing contempt of court.

Law Minister Basharat Raja said that the government was ready to implement the court order in letter and spirit but pointed out that presently two petitions were pending with the court and a final decision on the issue would be taken after adjudication of the cases(s).

Hearing of the petition is scheduled to be held on Friday (July 16).

The chair directed the health minister to frame permanent rules for parking stands in the state-run hospitals across the province. His ruling came after PML-N’s Suhaib Malik raised the issue of overcharging at parking stands in Bhalwal and Bhera.

On completion of agenda, the chair adjourned the session till Monday next (July 26), post-Eidul Azha.