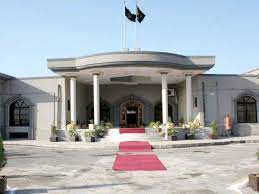 ISLAMABAD: The Islamabad High Court (IHC) on Wednesday directed the director of Cyber Crime Wing, Federal Investigation Agency (FIA), to coordinate with the Pakistan Federal Union of Journalists (PFUJ) and other representative bodies in order to seek proposals regarding proceedings against persons engaged in the profession of journalism.

A single bench of Chief Justice Athar Minallah issued the directions while hearing the petition of anchorperson Arshad Sharif who sought protection against the alleged harassment of the FIA.

During the hearing, Hamayun Bashir Tarar, director, Cyber Crime, FIA informed that no case has been initiated against the petitioner, Sharif.

The petitioner, Arshad, also informed the bench that after the last order no harassment has been caused to him. Afzal Butt and Shahzada Zulfiqar stated that they may be given an opportunity to prepare guidelines regarding proceedings against persons involved in the profession of journalism so that they may be made part of the SOPs.

At this, the IHC bench ordered the director, Cyber Crime Wing to coordinate with the PFUJ and other representative bodies such as the Islamabad High Court Press Association in order to seek proposals regarding proceedings against persons engaged in the profession of journalism in the context of protecting the rights guaranteed under Articles 19 and 19-A of the Constitution.

The bench after issuing direction deferred the hearing until May 26.

Previously, the court directed the FIA and the Inspector General of Police, Islamabad Capital Territory not to harass nor take any adverse action against the petitioner or other journalists relating to their professional duties and functions.

The director FIA had stated that no proceedings have been initiated against the petitioner nor any other journalist associated with the television channel managed and operated by M/s ARY Media Communication.

The counsel for the petitioner, however, stated that threatening messages were received by the petitioner and some other journalists. The IHC chief justice noted that the court has been receiving similar complaints from journalists in the past.

At this, Tarar assured the Court that no one would be unnecessarily harassed.

Justice Minallah said that the Court has no reason to doubt the statement made on behalf of the Agency. He added, “Nonetheless, the Agency is directed to submit a report, inter alia, explaining why the perception of threat from its officials regarding actions against persons engaged in the profession of journalism has not been dispelled.”