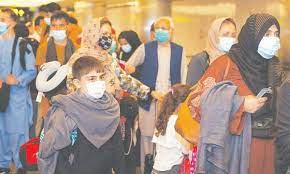 ISLAMABAD: Exiled Afghan journalists, currently in Pakistan, have expressed the need for assistance through engagement with international, Pakistani and international media.

They have also asked relevant departments to provide them technical assistance and resources that could help them continue their journalistic careers including partnerships and internships with local media, especially digital media to get familiarised with Pakistan.

This has been highlighted in a research study conducted by Pakistan-based media watchdog Freedom Network in cooperation with Deutsche Welle (DW) Akademie. It reveals that there is a need to extend humanitarian and professional assistance to exiled Afghan journalists in Pakistan who fled Afghanistan after the political developments in Kabul during the summer of 2021.

According to the study titled ‘Afghan Exiled Journalists in Pakistan: Lives in Limbo’, 74pc of exiled journalists have given their views.

“The study’s findings point to urgent and high degree of demand for humanitarian and professional assistance to dozens of Afghan journalists including many female media practitioners,” Iqbal Khattak, the executive director of Freedom Network, said while releasing the findings of the report.

He said the ambivalent Pakistani policy viz-a-viz refugee status for Afghans who have arrived in Pakistan after August 2021, including dozens of journalists and their families, is delaying humanitarian assistance. “Both the government and civil society in Pakistan, including international development actors are under an obligation to extend all possible support to these refugees in Pakistan,” he added.

The total number of exiled Afghan journalists in the country is hard to determine because statistics about recent Afghan refugees are not officially available. Exiled Afghan journalists are also a community in transit. Mr Khattak added that some have already left Pakistan after getting asylum in other countries while many others are stuck either awaiting visas or asylum.

Most have lost employment and are keen to get possible professional openings with media either within Pakistan or international media, he said.

No less than 30pc of exiled Afghan journalists who were approached for detailed survey were women which indicated how inclusive for women the now-lost democratic era was, professionally, Mr Khattak said.

According to the research, local media representatives based in Quetta, Peshawar and Islamabad, as well as the Digital Media Alliance of Pakistan (DigiMAP) representing over a dozen of Pakistan’s online-only public interest news media, expressed an interest in engaging exiled Afghan journalists in the production of public interest journalism.

Meanwhile, Pakistan’s Special Representative for Afghanistan Ambassador Mohammed Sadiq, during the Pak-Afghan Religious Scholars conference, said the Taliban were trying to address uphill challenges with scanty resources and lack of institutions and Pakistan would continue to extend its support to Kabul, especially in the health sector.

The event was organised by Centre for Research and Security Studies (CRSS) on Wednesday.

Mr Sadiq said Pakistan had already constructed three big hospitals in Afghanistan and efforts were underway to ensure that financial aid and medicines were provided to the administrations during the next 12 months.

“We are also considering sending officials to Afghanistan as part of our continued humanitarian assistance,” he said.

They also recommended that the Taliban should form a committee of religious experts, academicians, jurists, and technocrats to formulate an all-encompassing system of governance that represents all people.

Council of Islamic Ideology Chairman Dr Qibla Ayaz said if elections could not be held timely, then the Taliban should at least call a meeting (jirga) to discuss urgent and serious matters.