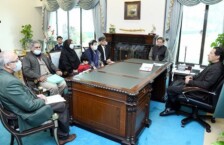 Prime Minister Imran Khan has sought a complete report on the whereabouts of missing journalist Mudassar Naaru and gave assurance to his family in this regard, Human Rights Minister Shireen Mazari said.

On December 1, Islamabad High Court (IHC) Chief Justice Athar Minallah had directed the minister to ensure a meeting between the parents and children of the missing person with the prime minister before the next hearing into the case.

“PM met with Mudassar Naaru’s parents & son this afternoon,” the minister said in a Twitter post on Thursday.

She added that the parents of the journalist provided details of what they had been going through after Naaru went missing.

“PM reassured them & immediately issued orders for [a] complete report on Naaru’s whereabouts and on exactly what happened [to him],” she said.

Mazari further said that Naaru’s family expressed confidence in the premier’s commitment to recover the journalist.

Meanwhile, in another statement, she quoted the premier as saying that he would ensure the welfare of the young child.

During the hearing a week ago, the IHC top judge had held the government responsible for recovering missing persons and the onus rested on the prime minister and the members of the federal cabinet.

The court had made the observations during the hearing of a petition filed by Rana Mehmood Ikram, father of the journalist.

Naaru went missing in August 2018 during a trip to Kaghan valley. He is believed to have been spotted near the Kaghan river before his disappearance. The family had an initial first information report (FIR) registered against “unidentified persons”.

They approached both the police and civil rights organisations to determine the whereabouts but to no avail. The case met a breakthrough a few months later when one of Naaru’s friends claimed spotting him at a detention centre meant for ‘missing persons’.

There has been no update on the whereabouts of the missing journalist ever since.