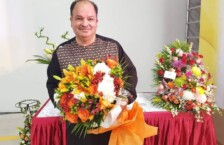 SWABI: Nizar Yousafzai, a renowned journalist and anchor of Shamshad TV, passed away due to cardiac arrest here on Thursday.

According to his family, Mr Yousafzai was taken to the Rawalpindi Institute of Cardiology two days ago after he felt pain in his chest. The doctors there advised that he should immediately be treated with a heart stent and he followed the advice.

However, he was again in pain on Wednesday night and passed away before dawn. He left behind three daughters, a son and widow to mourn his death.

Mr Yousafzai received his early education in his native Shahmansoor village of Swabi.

He had been working for Afghanistan-based Shamshad TV in Dubai for the last few years while he had already worked for the Pashto TV channel Khyber News. Besides his journalistic work, he had also played active role in promotion of cultural activities.

According to the family, his elder brother, Manzar Ali Khan, also passed away a few days ago. Though Mr Yousafzai belonged to Shahmansoor village, a major part of his life passed in the UAE where he also remained general secretary of Awami National Party.

“It is really a sad day. Nizar Yousafzai is a great loss for our party, Pakhtuns and local people. May Allah grant his departed soul eternal peace,” said Tamraz Khan, former ANP district general secretary, while talking to this correspondent.

The TV journalist was respected across Khyber Pakhtunkhwa and among Pakhtuns of Afghanistan because he had the capability to speak correct and fluent Pashto. He was also a true philanthropist and nationalist and actively worked for the rights of Pakhtuns.

Political activists here said that Mr Yousafzai’s services for Pakhtuns and Pashto language would always be remembered. His funeral prayer was held in Shahmansoor where he was laid to rest in his ancestral graveyard.