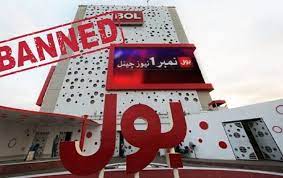 Pakistan Press Foundation (PPF) strongly condemns the decision of Pakistan Electronic Media Regulatory Authority (PEMRA)  to ban the transmission of Bol Television Network comprising Bol News and Bol Entertainment. We urge the authorities to  immediately lift the ban and ensure that the transmission should not be suspended until the completion of legal procedures.

On Sep 5, 2022, PEMRA announced to stop the broadcasting of Bol News and Bol Entertainment due to the failure of security clearance from the interior ministry.  The notice issued by the regulatory body said that a meeting presided over by the authority Chairman Saleem Baig held in Islamabad reviewed matters related to the issuance of licenses to Bol News and Bol Entertainment and decided to shut down the transmission on an immediate basis and they could not be allowed to operate until the Ministry of Interior issued a security clearance.

The announcement said that the licenses issued to M/s Labbaik Private Limited were revoked in 2017 by the authority. However, on May 5, 2017, The Sindh High Court (SHC) ordered the restoration of the license of the channel, Dawn reported.

The management of Bol TV has announced that they would continue to stand by the veracity and truth. It said, “Let the Bol TV speak”. The management said that Bol has been punished for telecasting the public meetings of Imran Khan and the PTI, Bol News reported.