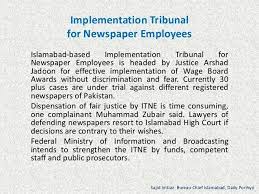 ISLAMABAD: Islamabad High Court (IHC) Chief Justice Athar Minallah on Friday directed the information ministry to place the summary for appointment of the Implementation Tribunal for Newspaper Employees (ITNE) chairman before the federal cabinet in its upcoming meeting.

He was hearing a case on journalists and media workers’ protection, job security and implementation of wage award.

Senior journalist Hamid Mir informed the court that despite the court’s direction issued in December last year for the appointment of the ITNE chairman, the post was still vacant.

On the court’s query, information ministry representatives said the summary had been forwarded to Prime Minister Shehbaz Sharif on Aug 19. It stated that the post of chairman ITNE was lying vacant since March 7, 2021.

The post was advertised through national dailies on May 31, 2022. The selection board conducted interviews of 13 candidates on June 30.

Justice Minallah termed it a violation of Article 19 of the Constitution if the government could not ensure press freedom. Further hearing in the matter was adjourned till October 21