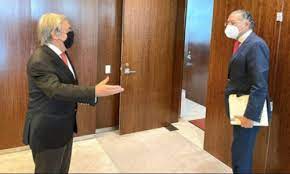 KARACHI: A pro-Indian army covert Twitter influence operation, suspended earlier this year by the social network, had been spreading propaganda against the Pakistan Army and attempting to highlight the Indian military’s purported successes in India-held Kashmir, a Stanford University study has shown.

“#ISPR has raised an #astonishing network of 4000-strong highly qualified #Information Warfare specialists during the past decade through a carefully crafted internship program that is directly run by #ISI,” the Stanford Internet Obser­vatory research quotes one of the accounts as saying.

In a paper titled ‘My Heart Belongs to Kashmir: An Analysis of a Pro-Indian Army Covert Influence Ope­ration on Twitter’ released on Wednesday, the Stanford Internet Observatory revealed the tactics the network employed, the narratives it was promoting and the possible links the network had to the Chinar Corps — a branch of the Indian army that operates in occupied Kashmir.

The paper notes that Twitter has not publicly attributed the network to any actor, and that the open source evidence didn’t allow the researchers to make any independent attribution, but they highlighted Indian news articles that showed social media companies Twitter, Facebook and Instagram temporarily suspending official accounts of the Chinar Corps for “coordinated inauthentic behavior”.

It also notes that the content of the Twitter network is consistent with the Chinar Corps objectives, “praising the work of the Indian Army in India-occupied Kashmir” and that the official account of the corps, @ChinarcorpsIA is the seventh most mentioned or retweeted account in the network.

The network was most active last year until Twitter suspended “at least part of the network in March 2022” for violating their Platform Manipulation and Spam Policy, saying the presumptive country of origin was India.

The network tweeted mostly in English, but also in Hindi and Urdu.

The accounts in it claimed to be relatives of Indian soldiers and proud Kashmiris, and their bios frequently portrayed their locations to be in held Kashmir. “One bio said, ‘Proud Indian and Proud Kashmiri. My heart belongs to Kashmir, Soul to India and Life to Humanity’.”

Two accounts existed to target specific individuals who were perceived as enemies of the Indian government and popular hashtags were related to Kashmir and the Indian and Pakistani militaries, the study says.

According to the study, the suspended network’s tweets tagged both authentic and suspended accounts, including regional journalists, politicians from Balochistan, and Indian politicians. The paper did not mention which Balochistan politicians were tagged by the network in its tweets.

The study highlights two accounts in particular in the network that “existed to target reporters, activists, and politicians in this way”. The accounts — @KashmirTraitors and @KashmirTraitor1 — and an accompanying YouTube channel, “targeted specific individuals, focusing on what the account deemed ‘anti-India’ journalists, calling reporters ‘#whitecollarterrorist’, for example; saying that they were working to corrupt the minds of Kashmiris; and accusing them of taking money from Pakistan”.

The accounts targeted personalities, like American activist and author Pieter Friedrich, who is critical of the Indian government and Hindutva, and Fahad Shah — a currently incarcerated Indian journalist, who has also been critical of the BJP government.

In targeting particular individuals, the @KashmirTraitors account would on occasion tag the official Chinar Corps account, @ChinarcorpsIA, to draw their attention to a thread.

This network also targeted the Pakistani government. One @KashmirTraitors tweet said: “#ISPR has raised an #astonishing network of 4000-strong highly qualified #Information Warfare specialists during the past decade through a carefully crafted internship program that is directly run by #ISI,” the study quotes the account as saying.

The narratives were patently anti-Pakistan and anti-China, with the report providing examples of how the network approached them.

They highlighted protests in Pakistan, with a particular focus on Balochistan. One tweet said, “Students protesting in Islamabad against the inaccessibility of internet in #Balochistan.”

The report adds: “Accounts accused Pakistan of spreading unfounded claims of Indian army atrocities, and they accused Pakistani soldiers of committing human rights abuses and protecting terrorists. Tweets claimed Pakistan was not safe for Hindus nor Muslims, and that Pakistan abandoned Pakistani citizens in China when the Covid-19 pandemic began.”

Tweets also criticised the state of women’s rights in Pakistan. One suspended account shared a tweet that said, “Pakistan Prime Minister ImranKhan has come under attack after he blamed women’s clothing for the rise in rapeand sexual assault (sic).”

With regard to the anti-China narrative, the report highlights how the network tried to portray the Indian military’s supposed dominance over the Chinese military. “Indian soldiers are courageous, while Chinese soldiers easily surrender. Indian soldiers were referred to as ‘bravehearts,’ and soldiers killed in clashes with China were called heroes and martyrs. Any failed attacks on India’s part were due to unethical Chinese strategies, according to the network.”

The authors Shelby Grossman, Emily Tianshi, David Thiel, and Renée DiResta conclude by saying “our report only scratches the surface” and calls upon researchers to further dig into the network.