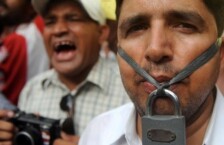 Islamabad: The Pakis­tan Federal Union of Journa­lists (Afzal Butt group) has warned that the threat to the freedom of press has assu­med ominous proportions.

A meeting of the PFUJ’s Federal Executive Council, held from July 5 to 7 with Mr Butt in the chair, observed that arm-twisting of media-owners was resulting in firing of workers and delay in salaries in the name of financial constraints and losses.

The meeting, attended by the FEC members, presidents and general secretaries of the journalist unions from the four provinces, observed that self-censorship had become the norm.

The FEC in its declaration said arm-twisting of media owners had forced them to comply with a dictated editorial policy. The owners are also made to keep a close eye on non-compliant workers and fire them without notice.

It said the media was being micro-managed by the state institutions using the carrot of government advertisements and pressures of a kind unknown so far. “In short, Article 19 of the Constitution is being continuously violated with complete impunity by the very authorities who are constitutionally obliged to safeguard it,” it added.

The meeting observed that “these media owners seem also to have, in their own self-interest, agreed to cooperate with the government in its attempt to promulgate what is called ‘Pakistan Media Regulatory Authority’ which in essence aims not at regulating the media but controlling it through coercive methods”.

The FEC condemned the decision to ban media discussion, articles, editorials, analyses and public comments on the references moved against judges, and harassment of journalists.

The FEC resolved to take a strong stand against retrenchments and for the establishment of media laws and norms in the best interest of media. “We will not allow any group, party or hidden hands to destroy the media industry.”