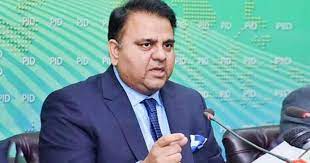 ISLAMABAD: Federal Minister for Information and Broadcasting Chaudhry Fawad Hussain Saturday said in categorical terms that the Pakistan Tehreek-e-Insaf (PTI) government, led by Prime Minister Imran Khan, had full faith in the fundamental, democratic and constitutional right to freedom of expression, but insisted that protection of the state interests was top priority for all.

Fawad said, “The development and welfare of journalists is one of our top priorities. The protection of interests of the state should be the first and foremost priority for all of us.”

He apprised the forum of the passage of the Journalist Protection Bill, the security of journalists, protection and welfare of their rights and procedure for participation of journalists in the Prime Minister’s New Pakistan Housing Scheme and deliberations were held on the same.

The minister said under the Journalist Protection Bill, journalists could not be asked about the sources of news and the safety of journalists was a responsibility of their respective institutions.

Likewise, he explained that it had been made mandatory for the media houses to provide security equipment to journalists and media workers sent for coverage in conflict zones. He added that steps had been taken to ensure payment of media dues, payment of more than Rs340 million had been made in 15 days, additional cheques of Rs150 million were issued for release immediately after Eid.

He said that he and Minister of State for Information would be in constant touch with press clubs and journalist organisations. He said that they wanted to bring housing facilities for journalists and press clubs should formulate procedures and standards in this regard. He said plans were also under way to link journalists to successful youth programmes so that they could get easy loan facilities.

Farrukh Habib said the PTI government was committed to welfare of journalists and solution to their problems and that he would start touring press clubs immediately after Eid.

In the meeting, officials of Lahore, Karachi and National Press Club Islamabad appreciated the personal efforts of the federal minister for passage of the Journalists Protection Bill.

He promised full cooperation in completion of the important legislative process.

Officials of the press clubs highlighted the plight of those affected by the coronavirus pandemic and other issues.

The federal minister directed the authorities concerned to ensure immediate assistance to the heirs of those affected and expired due to coronavirus.