Need of security of freelance journalists in Baluchistan stressed 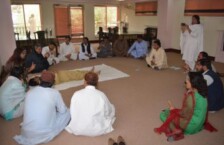 Physical and psycho-social security plays a vital role in the lives of freelance journalists.  This was the consensus of the round table discussion and training workshop on ‘Safety for Freelance Journalists’ based in Baluchistan organized by Pakistan Press Foundation (PPF) with the support of Foundation Open Society Institute in Quetta form 10 to 12 April 2018.

Freelance journalists from ten districts of Baluchistan participated in the discussion that was presided by Abdul Khaliq Rind, Secretary General of Quetta Press Club and Khalil Ahmed, President, Baluchistan Union of Journalists.

It was felt that the transformation of media from print to digital media has added additional dimensions to security threats. On the positive side the popularity of social media has been that freelance journalists have better opportunities and can now investigate in depth aspects of issues using the Internet and online resources.  The participants stressed that because of the economic conditions of media houses and the security situation, the use of social media in Balochistan is relatively low as compared to other regions of Pakistan.

Although safety is a serious issue for all media professionals in Pakistan, it is more severe for freelance journalists as they do not have media organizations, press clubs or associations to speak for them. Participants complained that it was difficult for freelance journalists to get membership in the press clubs and unions.  They complained that in traumatic conditions they do not get any support, and this affects their mental wellbeing.

During the three-day workshop participants were trained by trainer Shahwar Channa on physical, digital and psycho-social security, the connection between all three domains and its importance in the lives of freelance journalists.

The training discussed the importance of security protocols and included the practical first aid training, how to stop bleeding, immobilizing broken bones, types of stretchers, burns and its types, security precautions during emergency situations.