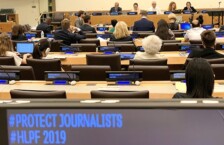 New possibilities to strengthen the monitoring of attacks on journalists were explored this week at a side-event held at the UN within the context of the High-Level Political Forum reviewing SDG progress.

The occasion was a side-event organized by UNESCO, three NGOs – Article 19, Committee to Protect Journalists and IFEX, the permanent missions to the UN of Lithuania, France and Greece, as well as the Group of Friends amongst UN delegations who support the protection of journalists.

Greek Ambassador Dionyssios Kalamvrezos opened the event with a statement from the Group of Friends, representing 21 UN Member States.

He noted: “Monitoring and reporting conducted under the quantitative Indicator 16.10.1 will significantly complement existing methodology and data-collection methods developed by the OHCHR, UNESCO and ILO for human rights monitoring and analysis of the full range of violations of human rights of journalists.”

In this way, monitoring and reporting would will also help find the most effective ways to address these violations and abuses, said the Ambassador.

Moderating the session was UNESCO’s director for Freedom of Expression and Media Development, Guy Berger. “Monitoring safety of journalists and impunity under indicator 16.10.1 is a significant barometer of wider trends in the 2030 Agenda,” he said.

Besides for the direct reference to five categories of crimes against journalists, ranging from killing to torture, listed within indicator 16.10.1, Berger noted that the metadata provided for additional “harmful acts” such as intimidation and digital attacks which also correlate with international codes for classifying crimes (ICCS).

“There are big possibilities at national and regional levels to monitor across the spectrum of kinds of attacks, depending on local relevance and threat profile,” he said.

The experience of the Council of Europe’s platform for monitoring attacks on journalists was presented by Silvia Chocorro, head of protection at the NGO Article 19. She listed the categories of attacks that civil society groups report into the platform, saying that there is currently assessment of these in the light of the SDG’s categories.

“The platform has created impact in increasing dialogue between civil society and governments, and between governments,” she stated.

Nela Balbi of IPYS Venezuela spoke about successful regional co-operation between NGOs to monitor attacks on journalists in eight countries in Latin America. “We were able to create common monitoring to and produce independent and comparative information about these countries, taking into account local realities as well as regional commonalities”.

She explained that for their methodology, the initiative used the SDG 16.10.1 indicators as well as further elaborating additional indicators so as to capture the nuances of attacks on journalists in the countries concerned.

Paola Sancedo of the Article 19 NGO described national monitoring experience undertaken by her organization in Mexico. “We found differential violence against female and male journalists: females are attacked and smeared about their personal lives, whereas the onslaught on males is about their professional roles.”

Owais Aslam Ali, Pakistan Press Foundation, said his organisation’s monitoring of attacks in Pakistan was aligned to ICCS categories. He urged closer co-operation between government and civil society in montoring, including for SDG 16.10.1.

Remarks were also made a representative of Ghana’s delegation at the UN, Jeffrey Ameyaw, who announced his country’s joining the Group of Friends. He revealed recent meetings in his country between government, media, legal organisations and journalists with the aim of creating a “national co-ordination mechanism for the safety of journalists”.

Ambassador Sami Bougacha of Tunisia, whose country is also a member of the Group of Friends, said that civil society is leading the monitoring within his country. The findings there show a general trend of sharp decreases in attacks.