‘Moor’, another masterpiece, will be released by Geo Films on 14th | Pakistan Press Foundation (PPF) 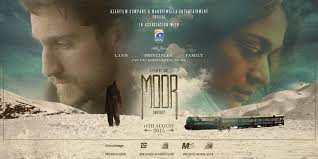 Karachi: Get ready to watch an another masterpiece by Jami Mahmood which is ‘Moor’, all set to release on 14th of August, 2015, by Geo films with Mandviwalla Entertainment.

‘Moor’ comes across as a film committed to celebrate the stark, spectacular beauty of the rugged terrain. ‘Moor’, which means ‘Ma’ in Pashto, can only be described as filmmaker Jami’s love letter to Balochistan, a place that usually stays in our emotional memory because of controversial headlines marred by stories of unflinching violence and absolute heartbreak.

“‘Moor’ is about families,” said Jami. With ‘Moor’, the filmmaker has turned the conversation back around to that same place but in a manner that is not only engaging but also celebrates the spectacular, stark beauty of Balochistan, and most crucially, its stories.

The story of the film is multi-layered; it is about the breakdown of railways, about families, about Pakistan, about systematic corruption, and an answer to the pervasive hopelessness conflicting us all. ‘Moor’ is a reflection of how life would be if we make questionable choices in life, jeopardising our integrity, destroying ourselves and our motherland. One man’s greed can raise havoc in the society.

The woman, who previously stole hearts for her performance in Dukhtar, Samiya Mumtaz, in a moment of astute observation and gratitude, remarked that perhaps Moor’s single greatest achievement is that it’s making us talk about Balochistan.

Although Hameed Sheikh has major releases like ‘Khuda Kay Liye’ and ‘Operation 021’ under his belt, the opportunity to act in a film about Quetta, Balochistan, was one he couldn’t refuse. I had always wished to preserve the railway tracks of Balochistan so that someone can someday make a movie featuring them,” stated Sheikh. With a cast of local actors, including Samiya Mumtaz, Shaz Khan, Ayaz Samoo, Shabbir Rana, Sonya Hussain and Ayaz Samoo, the Pride of Performance recipient, Abdul Qadir noted how being part of a film such as ‘Moor’ was a new experience for him.

Anwar Maqsood the sole lyricist of ‘Moor’ stirs emotions of patriotism, need for moral values and the obligations and duties as a citizen through his powerful writing. His lyrics truly strike a chord with the power of his well selected words.

The snow-capped highlands of Balochistan showcased in the film depicted a fresh view of the embattled province. ‘Moor’ is shot mainly in the Pashtun-dominated belt of Balochistan, with most scenes filmed in Muslim Baagh, Khanozai and Shelabagh. The remaining sequences are shot in Karachi. The storyline is based on the closure of the Zhob Valley railways in 1984, showing how a family is affected by growing corruption in the system.