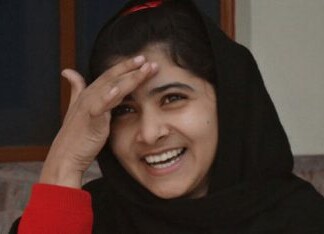 LONDON: Malala Yousufzai played a leading role in convincing the Afghan government to release Pakistani journalist Faizullah Khan, who was awarded four years in prison in July but was released over the weekend.

Faizullah Khan was detained by the Afghan security officials in the eastern Nangarhar province in April this year for travelling without proper documents. Pakistani journalists protested after Faizullah was sentenced and intense efforts began for his early release. The News is aware that Malala Yousufzai and her father Ziauddin Yousufzai wrote letters to Hamid Karzai and spoke to him and pleaded for the release of Faizullah Khan. Sources told The News that Malala Yousufzai called Hamid Karzai two days before the release of Faizullah Khan and reminded the former Afghan president of his promise to her that he will ensure release of the Pakistani reporter.

Karzai asked Malala about her studies and her campaign for education and informed Malala that Faziullah would be released and handed over to Pakistan. He appreciated Malala for taking up the case of Faizullah Khan. Faizullah’s wife has publicly thanked Malala Yousafzai for appealing to Hamid Karzai for her husband’s release.

When contacted by The News, Malala Yousufzai and her father thanked Hamid Karzai for releasing the Pakistani reporter. They said: “We are thankful to Hamid Karzai for honouring his word to us and ensuring that Faizuallah is released and returned to his family. Karzai was very kind when we spoke to him about this case and he understood that there was need to look into Faizullah’s case and that he needed justice. It is important that Hamid Kazrai’s role is fully acknowledged.”