LAHORE: The Lahore Literary Festival (LLF) commenced earlier than usual this year, thanks to last-minute changes in the event. It was a sunny day, the first in a while.

The event had been shifted to Avari Hotel, adjacent to the Alhamra Arts Council where due to ‘security reasons’ the organisers had not been able to arrange it. While the keynote address by Sharmila Tagore had a packed hall, a few attendees were seen outside in the hotel lobby and even more on the lawns.

A number of bookstalls had been set up on the lawns and earlier in the day food stalls were seen being put up. Unfortunately, however, many visitors, who inevitably compared their experiences at the LLFs held at Alhamra, said the food was not worth the price.

“Even the prices do not really matter if there is more choice,” said Afzal, a student. “The food has been provided by the hotel and it’s not that good. At the previous festivals they had a much better variety of local food such as kachoris and samosas, and café food such as sandwiches.”

A valid complaint that many felt was the lack of free drinking water. “Every year at the LLF there have always been free water dispensers,” a woman said. “This year we have to think twice before buying a bottle for Rs50 or Rs120 inside the hotel. It’s ridiculous.”

To add variety, there was an ice cream cart, also overcharging, and a coffee counter which saw never-ending queues. The number of sessions had been cut and four were being held simultaneously, instead of the previously planned six, to the relief of many.

“It’s still too many sessions, but now it’s less overwhelming a choice than before,” said Ayesha, a schoolteacher.

However many who had been looking forward to sessions on cinema and a meeting with Indian filmmakers Mahesh and Pooja Bhatt were disappointed to see the sessions had been cancelled.

“A huge chunk of the old schedule has been removed,” said Ajoka Director Madeeha Gauhar. “For a lot of people these sessions add a lot of colour to the festival, but it was also an unfortunate situation.”

“I find it disappointing that the venue was changed from a beautiful cultural centre to a hotel where the whole thing becomes so much more exclusive and even elitist,” said Ayesha Gazdar, the daughter of the late filmmaker Mushtaq Gazdar, and a filmmaker herself.

Writer Mohammad Hanif said it was strange that the Punjab government, which was a popular government and had presence in Lahore for almost forever, could only provide security ironically for just Saturday and Sunday and in a hotel across the road from Alhamra.

Kamran Lashari said it was ironic how the festival was targeted for security issues considering it was the most “benign event” in a year and that it was a shame considering the organisers were told to make huge changes at the last moment. “Is it going to be targeted like Basant?” he questioned.

Fasih Ahmed, one of the organisers, said they were “frazzled” making sure all arrangements were in place, but while the festival began warily it ended on a high, positive note showing the public would always be hungry for such events wherever they took place.

By the end of the day, the place was jam-packed, including the lawn and lobby, and many people crowded the area upstairs as well. It seemed the hotel had been taken over by LLF attendees. 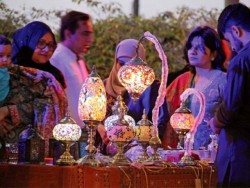 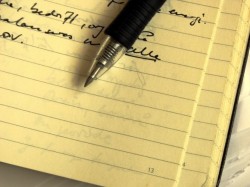