LAHORE: The Lahore High Court directed on Friday a provincial law officer to submit a notification regarding constitution of an air pollution standing commission, as ordered by the Supreme Court.

Justice Ayesha A. Malik was hearing petitions filed by Pakistan Tehreek-i-Insaf leader Waleed Iqbal and others questioning the failure of the government to implement recommendations of a smog commission established by the high court in 2017.

He stated that Punjab had been divided into three zones — green, yellow and red. Green zones are those where smoke emission is less, yellow with moderate and red with large smoke emotion. He said no brick kilns would be closed in green zones while yellow areas would be monitored and analyzed for abrupt weather changes and all kilns using older forms of technology would be banned in red zones.

The judge adjourned hearing till Dec 16 and directed the law officer to produce the notification of the air pollution standing commission, if established by the government.

Earlier, advocate Sheraz Zaka representing Mr Iqbal said recommendations of smog commission had not been implemented. He said the chief secretary and the secretary of environment failed to perform their statutory obligations.

The lawyer that the entire province was adversely affected by spillover effects of smog. He said chief secretary and secretary environment should be directed to clamp down on commercial activities of factory owners established in residential areas in Lahore. 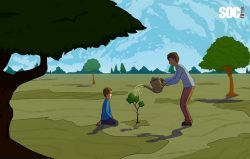