Journalists Who Were Harassed, Manhandled and Forced out of Work during Imran Khan’s Rule -
ISSN 2226-7492

Journalists Who Were Harassed, Manhandled and Forced out of Work during Imran Khan’s Rule 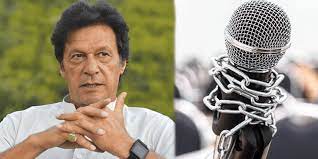 Imran Khan claimed that he never issued orders against any journalists and only found out about a journalist’s disappearance or treatment in Cabinet meetings.

On July 16th  2022 at a seminar on media freedom in Islamabad, former PM and PTI Chairman Imran Khan claimed that he never issued orders against any journalists and only found out about a journalist’s disappearance or treatment in Cabinet meetings.

During the seminar Imran Khan denied thinking about taking any actions against any journalist explaining that one of the most significant elements that he witnessed in the West was freedom of speech. He further opined that no society can progress without freedom of speech.

But at the same time, he did also admit to approaching the court in a case against renowned anchor Najam Sethi who he claimed was involved in what he referred to as ‘character assassination.’

The fact of the matter is that it was under Imran Khan’s regime that talk shows were shut down, journalists and members of the media were attacked, harassed, tortured, forced out of jobs and thrown into jail.

This claim of being unaware and supporting media freedom rings hollow when we look at the horrific treatment meted out to the victims and one cannot help but question on what basis can such claims of media freedom and freedom of speech be made?

It is not unsubstantiated when in 2021 Reporters without Border labelled the PTI chairman as a ‘press freedom predator’ as the following evidence shows:

Journalist and anchor Saleem Safi was removed from the panel of news analysts in 2018 when he reported about the closure of the RTS system during the elections.

Journalist and anchor Nusrat Javed was forced to leave his job for criticizing Imran Khan. In December 2018, while returning to his house in Islamabad he barely escaped an attempt on his life when he was fired upon.

On March 28, 2019, Imran Khan sued renowned journalist and anchor Najam Sethi for Rs10 billion after the latter shared some insights about his family life during a TV show. Due to the personal grudge, Sethi’s program on Channel 24 was forced to shut several times after.

On July 21st 2020, journalist Matiullah Jan was abducted in Islamabad in broad daylight and was released after 12 hours. He was picked from one of the most sensitive areas in the federal capital but the whereabouts of his abductors remain unknown to this day.

On April 20, 2021, former chairman PEMRA Absar Alam was taking a walk in a park outside his residence when he was shot at by an unidentified assailant. While the man who fired at him was caught, the perpetrators of the attack remain unknown till date.

Editor-in-Chief of Jang, The News and Geo Mir Shakil-ur-Rehman was kept in detention for months in a 34-year-old property related case. He was taken into custody even though he did produce all the record related to the aforesaid property and recorded his statement. He was set free this year.

Journalist and anchor Hamid Mir was made to leave his job and was unable to return until Imran Khan was gone. It is pertinent to mention here that Mir was also taken off screen during the Pervez Musharraf era.

On May 26th 2021, vlogger and journalist Asad Ali Toor was beaten up inside his house. He was subjected to torture by three intruders who had forcibly entered his property. He was also forced out of Samaa TV as a Producer after he criticized the PTI chairman in his vlogs.

Those who faced Imran Khan’s wrath included his former friend Mohsin Baig. The journalist was arrested by the FIA after a complaint by then federal minister Murad Saeed. Baig’s only crime was to talk about Saeed’s performance as a minister during a TV show.

Female journalists too were subjected to harassment during Imran Khan’s term as the prime minister. Journalist and anchor Asma Sherazi had to face intense trolling and a very stern reaction by the PTI after writing a column for the BBC Urdu. The PTI’s social media team also ensured that she was subjected to the most vulgar digital campaign attacks on the social media platform Twitter.

Journalist and anchor Talat Hussain was forced out of his job for being a critique of the then ruling PTI and those at the helm. The Geo News administration shut down Hussain’s program Naya Pakistan and told the staff that they were no longer needed. Likewise, media organizations laid off hundreds of workers on the pretext of financial difficulties.

The Naya Daur website was taken down in 2018 and 2020, with PEMRA often demanding that the articles critical of Imran Khan and those at the helm be removed.

During a presser, the DG ISPR had advised the media to ‘report positively’ for six months about the new government and afterwards, asked them to continue doing the same for as much time.