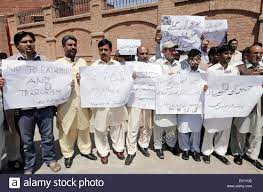 The Khyber Union of Journalist (KhUJ) and Peshawar Press Club members on Wednesday held a protest demonstration against the police hooliganism on Peshawar Press Club over the issue of a press conference of eunuch community. Addressing the protesting community, the KhUJ and Press Club leaders termed it an attack on the freedom of speech and freedom of expression. They asked the government and authorities concerned to immediately suspend the concerned DSP Ihsan Shah and initiate stern departmental action for violating the sanctity of press club.

, so that in future no police official could even think to attack the freedom of press.  Meanwhile, the office bearers of Mardan Press Club also strongly condemned the police attack on Peshawar Press Club.