Attack on journalist by lawyers condemned 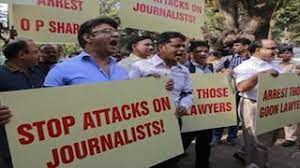 LAHORE: Lahore Press Club and journalist organisations have condemned the attack and torture on senior journalist Tajammul Gurmani by a group of lawyers.

The meeting chaired by acting president of LPC Javaid Farooqi called for immediate arrest and legal action against the lawyers involved in the crime. The journalists also condemned the act in which the lawyers allegedly entered the house of journalist Tajammul Gurmani while breaching the sanctity of the house and tortured him.