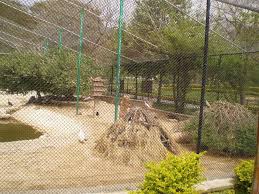 ISLAMABAD: Minister of State for Climate Change Zartaj Gul on Wednesday told a Senate committee that she had requested the government to hand over the control of Marghazar Zoo to the Islamabad Wildlife Management Board for better management of the zoo and care of the animals.

At present the Metropolitan Corporation Islamabad (MCI) is running the affairs of the zoo.

“The zoo is in a terrible condition where exotic animals are dying for want of trained caretakers and handlers,” Zartaj Gul told the Senate Standing Committee on Climate Change.

She told the committee that the height of the zoo staff’s apathy could be gauged from the fact that they took home food meant for the animals.

The committee met here with Senator Sitara Ayaz in the chair to discuss the budgetary matters and ongoing projects of the Ministry of Climate Change.

However, various issues pertaining to the deteriorating environment of the capital city including quality of the air, cutting of more trees, no parking spaces for high rises and encroachment on 725 acres acquired by the Ministry of Climate Change for botanical garden were taken up.

While members of the committee complained of deplorable state of animals at the Islamabad Zoo, Zartaj Gul said that her ministry had sent a summary to the ministry concerned seeking Islamabad Wildlife Management Board’s control over the Marghazar Zoo.

“The zoo needs to be returned from the MCI to the Islamabad Wildlife Management Board that has qualified individuals and trained caretakers,” she said.

She also briefed the committee about the botanical garden the ministry planned to construct in Bahra Kahu. The garden will also have a zoo, she added.

Replying to a question from the chairperson of the committee, Senator Sitara Ayaz, climate change secretary Nasir Jami said the land had been retrieved from the encroachers and to secure the premises a wall would be built around the land.

Earlier, in January the auditor general of Pakistan (AGP) had recommended an inquiry into the failure of the Ministry of Climate Change to establish a botanical garden, though it was handed over the land about 20 years ago.

The Capital Development Authority (CDA) had handed over the physical possession of the land in Banigala Hills to the Zoological Survey of Pakistan in 1999 for the establishment of the zoo-cum-botanical garden.

However, the AGP in a report for 2017-18 observed that so far the Zoological Survey of Pakistan could not develop the garden.